It is the start of the season, but that doesn’t mean we need to break the bank to be competitive.

With June 6 coming up we don’t really want to be playing the Germans and the Americans together, but we can’t avoid it.

I am still calling this a budget build even though we do use two elite cards – a couple of quarters amongst the pennies – but, if you are crafting specials then the B-17 should be one of the top priorities.

This was constructed and recorded on the 0.9.17 build of KARDS – Card text/cost/rarity may have changed since publication.

The numbers in the deck look a little bit funky, but the reason why there are so few orders in this deck is that every unit we play comes with an order attached to it.

There are some hidden synergies in this deck, but they come to break the opponent’s back in the late game.

There are just a few cards that we like to see in the opening hand: Gunship Mission, F4F Wildcat, M16 Half-Track, and Nebelwefer 42. A Panzer 38t is acceptable, but not required.

If a 17th Infantry Regiment sneaks in there then that isn’t the worst thing, but the infantry’s deployment ability works really well later in the game so, if possible, try to hold on to it.

The first couple of turns are all about game management. Use the Gunship Missions and the Nebelwerfers (half of a Bloody Sickle on a 2-2 artillery) to remove small stuff, M16s (an infantry/plane naval power on a 2-2 tank) to put troublesome infantry back in hand early on, or drop a Wildcat to protect the base. Turns 1-4 are the most vulnerable part of the game for this deck.

There are few better things in the game on Turn 6 then the Panzer IV F2. Sending an expensive unit back to hand is a huge tempo swing or using the 2/3s of a Sudden Strike helps catch up from behind.

Turns 6-8 are the time to take the frontline as well. Giving the Nebels and bombers some protection changes the complexion of almost all games with this deck.

I suggest holding on to M4s, Death From Above, and We Can Do It until they are really needed. The draw on the Sherman is something this deck needs, the DFAs do their best work against a lone target, and We Can Do It repairs all units, our HQ, draws a card, and pushes our kredits beyond the 12 barrier. 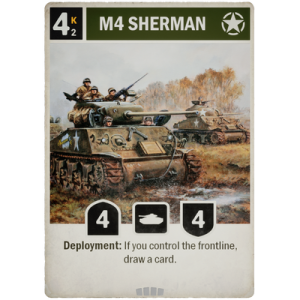 The more kredits the more fun can be had.

A simple, but sometimes overlooked play is using a Panzer or an M16 to force a retreat, grabbing the frontline and then dropping a Sherman to get a draw. Simple play, but pretty powerful.

Then if you have the frontline and the big fellas (B-17s) come out and eat up a unit then the odds of victory go way, way up.

Later in the game is also a good spot for the 17th Infantry Regiment too. Despite the changes to some of the other pump orders, the 17th can make Nebelwerfers, fighters, or bombers all just a little bit stronger.

Using our Panzer IV F2s on our own stuff is also an option this late. Giving a B-17 another deployment trigger is absurd.

Finally, keep in mind that We Can Do It pushes you over the 12-kredit maximum now. It is a subtle strength, but it is a strength.

Almost every unit in this deck has so much value that it is hard to squeeze much more out. 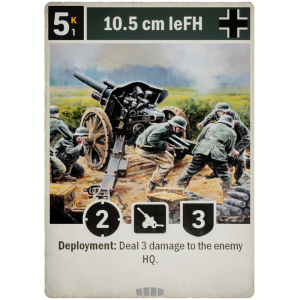 Anytime you have good special and elite cards then I suggest using them.

B-25 Mitchell x1 — TBF-1 Avenger x2 – This is, arguably, a sidegrade. The B-25 is a touch cheaper, hits HQs, and has an extra defense, but the TBF-1 is hard removal and that is hard to replicate.

B-25 Mitchell x1 — 101st Airborne – The paratroopers are just raw power at a cheaper cost with a target ability. A clear upgrade if you have the Screaming Eagles.

B-25 Mitchell x1 — Leopold x1 – The mega-cannon has, arguably, the best deployment ability in the game. If you have it, play it.