This seventh installment of the series is a throwback of sorts. The first versions of Commandos were mostly Britain-USA combo builds. The specs have evolved since and instead of going all combo we go part combo, part big fellas.

These decks were constructed on the 0.9.4b-0.9.7 build of KARDS – Card text/cost/rarity may have changed since publication. 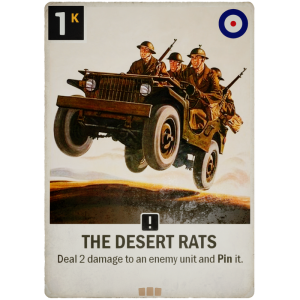 This is an expensive deck – in terms of kredits and rarity – so if you see anything over 3 kredits feel free to throw it back.

Overall, you want early removal orders and then the beginnings of the Commando engine (any of the three main players work). If you have a couple of Gunship Missions then take a look at the opposing HQ, if it is Hsinking I tend to put them back, but if it is anything else then hold on to them.

For the opening stages of the game just remove everything you see that is a threat. If anything gets buffed out of damage range then put it back in the opponent’s hand with a Naval Power. This is also the spot where your M16s can stem some early bleeding or bounce some lighter threats.

Since all of your orders cost a few kredits then you want to delay the deployment of the Commandos and the Crusaders until they will generate some value.

AA Barrage is an interesting card in this deck. If you can put a Hayabusa back in an opponent’s hand then go for it. If not then try to hold on to AA Barrages until later on so you can do some silly things. 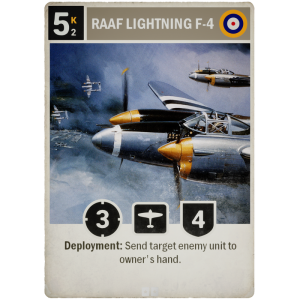 Depending on the state of the game, a Turn 5 Lighting into a Turn 6 AA Barrage + Lighting can be an early knock out blow.

This is also where Commandos and Crusaders start to earn their money and generate value. 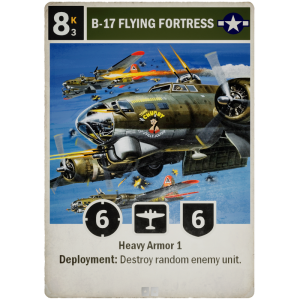 Hopefully, the opponent is around 15-12(ish) HQ defense at this point and you are ready to rule the skies with B-17s.

Be careful using your units in this deck. You only have a scant few and if they are isolated they are far less effective, especially the Commandos themselves.

Finally, Gunship Missions and Daylight Bombings can connect with an HQ as easily as a support line unit and both can finish off a game.

As with the rest of our Commando week decks, the Crusader and Night Watch are Special, but also a big part of the fun. There are some substitutions that can be made to make it more budget friendly.

Mobilization x2 — Convoy HX 175 x2 – If you don’t have the American order then the British one can get the job done, especially when the Crusader is around.

Daylight Bombing x2 — Swordfish Mk I x2 – While the Daylight Bombing can go after the HQ and does more damage, the small British bomber can do a ton of work if used properly and constantly.

RAAF Lighting F-4 x2 — Spitfire Mk Ia or V – The Lightning have an immediate impact on the battlefield, but the Spitfires provide a lot of attack power in the air. Spitfires typically turn into a 2-for-1 of some kind as well.

Strategic Bombing x1 — Naval Bombardment x1 – As you can see in the two different videos, both of these are conditional sweepers, but the Naval Bombardment is cheaper and provides a pin so it can fit into this slot.

B-17 Flying Fortress x2 — B-25 Mitchell x2 – The B-17 is, arguably, the best American card, but the B-25 is cheaper, does a good chunk of damage when it hits the field, and still packs a punch when it can attack.

We are feeling pretty comfortable with the build that we have here, but there is certainly one missing piece.

Fortification x1 — 85 Pioneer Company x1 – As I keep saying, this is an automatic upgrade if you have one.

Naval Power x2 — HMS Illustrious x1, The Empire Strikes x1 – Since we are playing a bunch of bombers already then this might be an interesting way to build this one, plus it is keeping the British order numbers high. It might be worth a try.