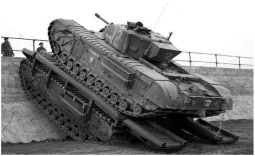 We are returning back to our regularly scheduled version of, “What I’m Playin’,” with a trip up the ramp.

More specifically we are trying to make ramp happen in Kards.

For the uninitiated, “ramp” refers to accelerating our kredits, giving us additional resources beyond the one kredit per turn. The term comes from the Magic The Gathering card Rampant Growth.

The best power to ramp is the United States (by far) so we will start there. For our ally, the British allow us to play a bunch of cards that catch us up when our opponent inevitably gets ahead on the battlefield with units. The combination of getting ahead on units, while also wasting the opponent’s units can be pretty deadly.

Before we get to it, if you would like to share a deck you have been working on, feel free to comment here, e-mail kardspodcast@gmail.com, reach out on Twitter @KARDSPodcast, or hit me up on the Discord channel.

And don’t forget to tell your friends to sign up for the KARDS Beta Test and Discord at KARDS.com.

This deck was constructed on the 0.8.28 build of KARDS – before the new progression system and new card releases – Card text/cost/rarity may have changed since publication.

One thing to get out of the way early is that there are a lot of special and elite cards in this deck.

You can make ramp without these cards – more details on that later one – but the point is that most of the payoffs in this deck are special or elite, not the ramp itself.

One of the most important decisions you will make comes right away. As a general rule, I throw back anything that isn’t The War Machine or Enemy Spotted.

However, this is where you need to have some situational awareness as well. If you are going up against an opponent that has the Japanese HQ Hsinking or the German HQ Tripoli then it might be a good idea to hang on to a Naval Bombardment, a Naval Power or an M16 Half-Track to mess with their gameplan. This is a tougher call for the other HQs, but the Japanese and the Germans are often going to be going after your front line so having the interaction is useful.

Anything that is over 4 kredits goes back though. You aren’t going to be able to use, nor do you want to use, anything over 4 kredits in the early game.

The best play you can make on Turn 1 is setting up an Enemy Spotted. It is also the only play that you have on Turn 1.

On turn 2 you want to use The War Machine to jump your kredit cache from 2 to 4 the majority of the time. In the games where you don’t have a War Machine then re-engage the Enemy Spotted to try to find some of those ramp cards.

While you need to be situationally aware on Turn 2 there are very few things that you want to do other than spotting the enemy or ramping. There are very few decks that can get completely out of hand on the first two turns so be very careful using your Gunship Missions until you must absolutely use them.

The majority of the time you are going to skip over Turn 3 which is the plan of this deck. (If you do have to have a Turn 3, the ideal turn to have is a War Machine and an Enemy Spotted aka an extension of your plan from the first two turns). 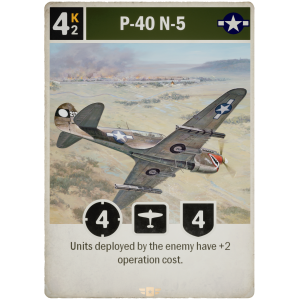 However, the decision tree starts to really separate for this deck at this point. There are going to be a lot of different decisions that you are going to have to make because you are going to, hopefully, have a lot more resources at your disposal.

The best thing to play on Turn 4 is either a P-40 N-5 to gum up the opponent’s units or a Black Watch to gum up the opponent’s orders. Both of these really slow down opposing decks – it might even de-rail a Commonwealth deck – and give you a little of room to breathe while you pull away and start dropping huge units. However, there are only two copies of those cards so these won’t always be what you have on the field at this point.

On the surface, the P-38 doesn’t look all that impactful, but the 3-5 USA Fighter is better than almost every single unit that an opponent is going to put on the battlefield in the early game. The key is how tough it is. It is going to take multiple attacks from an opponent or orders to get it off the field, while at the same time it dodges almost every one-shot removal order. It also boosts some of the cards that we will play later on.

Most of the time I try to avoid using Death From Above on Turn 4. The removal order is meant to be used on bigger and better units than anything that your opponent will have played at that point. The caveat is Elite units, if you can pick those off, then go for it. In fact, Naval Bombardment is probably better on Turn 4 if you are falling behind since it pins all the units in the frontline. Naval Bombardment is a mini Carpet Bombing.

Sometimes you will hit the jackpot and play The War Machine on Turn 2 and then two War Machines on Turn 4. The only thing to keep in mind here is to make sure that you have an Enemy Spotted or a We Can Do It or both. If you play all of that ramp you might run out of cards in hand and allow your opponent to catch up on kredits while you try to topdeck your way back into a hand. You want to make sure that you are taking advantage of your kredit advantage when you have it.

In theory, this is a solid midrange deck.

On your Turn 5, which is probably Turn 3 for your opponent, you can drop an HMS Illustrious and get things started. If you have a P-38 out then that is a pair of 2-3 bombers rolling in which can rip through a ton of weaker units.

Otherwise, you are probably going to want to combine 2 kredit (Gunship Mission) and 3 kredit (Naval Power) orders to keep your HQ healthy while messing with your opponent’s units.

You come up to another decision point on Turn 6. Depending on the battlefield status, both your opponent and yours, this might be where you drop your first We Can Do It!.

Both We Can Do It and Carpet Bombing come in to play around this point in the game. You want and usually can to set them up to be 3- 4- or even 5-for-1s.

Once your opponent sees what you are up to they are going to probably flood the battlefield to end the game as quickly as possible. There are two routes to go at that point. Use your units, which can absorb some damage, to take out opposing units and the heal from the We Can Do It to both your units and HQ is worth at least two cards, plus, you get to draw one. Or, a well-timed Carpet Bombing can sweep away all of the opposition and leave an empty battlefield for you to work with.

This is also when you can start dropping your first finishers. The Spitfires or Corsair will dominate the battlefield if you can jump the curve into them.

This deck has a ton of staying power too.

Even if your opponent can catch up on the Kredits, you have access to a ton more aggregate kredits in your favor.

The B-17s usually make their presence felt at this point. Since they have a Death From Above strapped to them, and they are attack and removal magnets, they get a ton of value in the late game. Mop up with the fighters and you are probably finishing the game in about three turns.

We were lucky enough to pull off a 5-0 with our build here.

Overall we played Soviet-Japanese Cards & Guards twice, a Soviet-British Guard and Fury deck, a quick one against burn, and an epic struggle against a big German-Japanese deck.

These really show off how important getting that jump on the kredit curve is while also showing off the staying power that we have with this build.

Since there are a bunch of special and elite cards this will be more of a lightning round than a usual breakdown.

This one is pretty tuned and pretty decked out with cards at higher rarities, but there are three spots where an upgrade might workout.

Instead of relying on your opponent coming after you, this is just raw card draw. I haven’t had a chance to work on it too much, the extra kredits needed might not be worth it, but I would be interested to see how this would affect the deck. 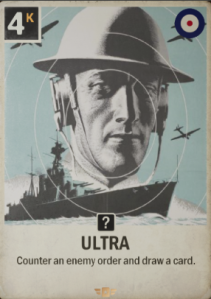 This is probably a sidegrade instead of an upgrade.

I had a copy of Ultra in this deck for a long time and I was very happy with it. I crafted a Black Watch and have been happy with those results too. As the deckbuilder, you can pick which works better for you.

Since the Spitfire slot is a payoff slot it is pretty flexible. The three replacements here are all Elite cards that can work well. The Warhawk might be the best one since it only costs 3 kredits to get on the field and it can pick off a unit when it shows up.

All of them have their advantages though, so, if you have them then give them a try.