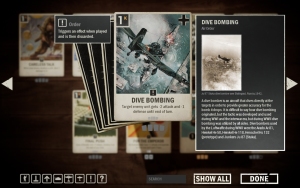 One of only a few cards that lower a unit’s stats but can also be used to remove low defense units by reducing their defense to 0.

Japanese and Soviet aggro decks have problems dealing with high-defense low-attack guard units. You could lose your entire frontline trading into them. This is where cards like Dive Bombing come in.

84th Infantry Regiment or Churchill Mk IV in your way? No problem, Dive Bombing has your back, reducing their attack to 0 and allowing you to smash into them with your units with impunity.

Commandos hiding in a shroud of smokescreen? Just order a bombing.

Setting up for more favorable trades or snuffing out sneaky units, the possibilities with Dive Bombing are endless.