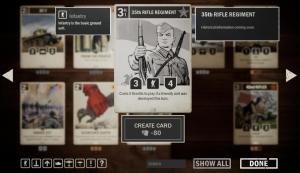 This week we are taking a look at the Soviet infantry, the 35th Rifle Regiment.

Another wonderful card with a unique effect and further solidifying the Soviet’s self-destructive theme, plus, there are many ways to bring this unit out for free. It also has the added benefit of being an infantry unit which compliments any infantry based decks.

One deck, in particular, that takes advantage of this card, is an aggressive Soviet/Japanese deck. Japan has great early-game draw power to sustain your hand, and ways to turn on this unit’s special ability as you flood the field with cheap infantry.

Thanks to Deadly Duty (Standard Japanese Order, Cost: 0 – Destroy a friendly unit. Draw 2 cards.) it’s possible to bring the 35th Rifle Regiment into play on the first turn of the game while drawing 2 cards.

Other good targets for self-sacrifice orders like Deadly Duty, Red Banner, and Ural Factories include the 321st Rifle Regiment, I-15 Chaika and the 13th Rifle Regiment. All of these add to the power of the 35th Rifle Regiment and are the start of a good deck.