Three down and two to go.

We have gone through the USA, the Japanese, and Soviets, so far on the upgrading series.

The British are the most controlling and orders-heavy faction, for sure.

One piece of advice, don’t fall in love with orders too much. The bread and butter of all decks are units and using units effectively. Sure, there are some orders that do cool stuff but stick to the units when you start out.

Units tend to have a much bigger impact on the game in the long haul.

While we are upgrading, three things to keep in mind:

As you grow as a player, your collection expands and you start crafting new cards feel free to move beyond these decklists.

If you pull some sweet special and elite cards then you should definitely tailor your decklists to playing them! They are fun and will help you win!

This deck was constructed on the 0.8.28 builds of KARDS – Card text/cost/rarity may have changed since publication.

I am lucky enough to be in the game for a while now so I have been able to build a nice collection and reach the Field Marshall ranks.

With that said, I am going to set up some ground rules for these upgrades:

I haven’t had a lot of success mixing the British and the Germans together so far.

While I have found a lot of gameplan crossover with the other nations, this combo seems to be going in different directions most of the time.

However, this is a challenge, not an excuse.

We are going to go back to World War I with this build as our plan is to get the front line and then hold it with a ton of high hit point units while we load and fire the cannons in the background.

An early Panzer II-A or 5th Brigade backed up with a 4. Pioneer Battalion is really tough to break through for most decks for at least a few turns.

A lot of the British infantry provides further help in terms of buffs or other guard targets to shoot at.

While holding on to the front set up the artillery in the back along with a fighter and start lobbing shots over the top. Chucking the HQ for 4-6 damage a turn ends the game very quickly.

The British and the Japanese can play a tempo game while hammering away from the skies. You are probably going to have to open a few cards to make this one really work.

Early on, pin or destroy anything that the opponent puts on the field with your efficient orders while your kredit cache grows. The full team pin from Naval Operations is more important then the damage it deals (unless you can get some of the new Japanese planes that have that very interesting line of text, “Your orders do +1 damage.”)

After you have some resources start to dropping tough guard units. You want to use them to protect the HQ and the planes, of course, but get them in the frontline when you have the opportunity. 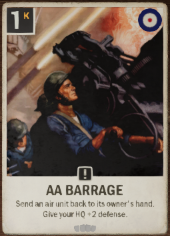 If you can get there early with the 5th Brigade, absorb some hits, and buy some time that is a really good move. If you have to wait a little bit that is OK, but make sure you can get that front line and hold it. You aren’t going to do a ton of damage on the ground, you are just buying time for the fighters to clean up.

Don’t forget that you can use AA Barrage to pick up your own fighters too. Do this to either refresh their hit points or to get another poke with a Zero.

This time we are going to try and catch our enemies off-guard with an aggressive build of two countries that typically play a more conservative role.

Stick a Humber Mk II and M8 Greyhounds as early as possible. Get it into the front line and give it a pump with USACE or Supply Shipment and let it rip on the opposing HQ. A lot of people underestimate the Humber, but once it hits 3 power it cuts hard.

Try to avoid sinking too many resources into one unit though. There is no penalty for spreading the pumps out on a couple of units or saving all of the pumps for one killing blow.

While the enemy is preoccupied with the front line, on turn four the M4 Shermans can draw a card (if needed) and then on turn five you can swoop in with a Hurricane for a surprise strike (if needed).

I highly recommend filling out on The Desert Rats as soon as you can. It is a flexible card that goes in lots of decks, but in this one the pinning ability is huge because it will keep opposing aggressive units in place so you can grab the frontline and execute the gameplan.

By now, you have followed our advice from last week and gotten all four of your Bloody Sickles.

If you haven’t…then go get them. It is one of the most efficient cards in the entire game.

This is probably as close to a mill deck that we can get with the tools we have right now, so if that is your playstyle, then here you go.

In theory, all we are trying to do is survive for 40 cards. This is really, really tough since we can’t knock out any cards from the opponent’s deck directly. However, every card in this deck is about survival.

In the early game drop your infantry to soak up damage from opposing infantry and light tanks. Save your removal for bigger targets because, for the most part, you can outlast anything small that hits the field early.

Once you have a nice defense network built up, use your Fortifications to make up for early damage (and to get out of The Commonwealth range). 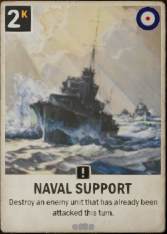 Use some removal to then take the frontline. You aren’t taking it to do too much damage, but instead to create a second layer of defense while you strangle your opponent out of the game.

After picking up your Desert Rats, I suggest making or opening Naval Power. The tempo and HQ boost that card gives you make it a near staple in British decks. They fit very nicely in this deck since all you want to do is a delay, delay, delay. 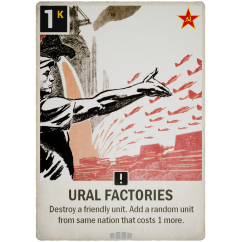 Beyond this version, there are two very fun build-around strategies that I recommend to try out in British-Soviet decks.

First, Naval Support is a super fun card. It makes Churchill’s into 6/6s, it makes 84th Infantry Regiments into 8/8s, and it can neuter damaged opposing units. One tip is to only use Naval Support on your units when you are going to attack with them. Units that get Naval Support but don’t do anything right away are very vulnerable to hard removal orders and bounce orders.

Second, Ural Factories is a card that I have had some good success with. Since the British tend to lean more in the order direction their units tend to be high quality. Taking an attack or two on the chin with a Churchill and then upgrading it to a Comet, a Spitfire, or a Stirling bomber is real.

Try both once you start crafting some cards if you want a different playstyle.

Feel free to send feedback and questions to kardspodcast@gmail.com, reach out on Twitter @KARDSPodcast, or hit me up on the Discord channel.