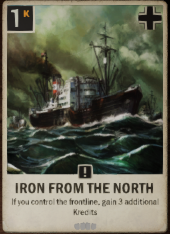 This edition of What I’m Playin’ was inspired by our other series, Card of the Week.

In that one, Cybernetic talked about Iron From the North and how it can be used for some explosive plays.

I dropped 80 resources on a single card to complete this one, but, this deck is sweet, fun, resilient, and incredibly consistent – maybe a little too consistent. 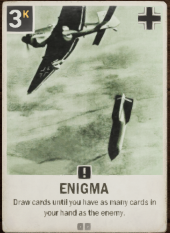 Not to be too hyperbolic, but if piloted correctly, this is a buzzsaw. If I was asked to give a recommendation, this, or some flavor of it, is the best deck available right now.

Before we get to it, if you would like to share a deck you have been working on, feel free to comment here, e-mail kardspodcast@gmail.com, reach out on Twitter @KARDSPodcast, or hit me up on the Discord channel.

And don’t forget to tell your friends to sign up for the KARDS Beta Test and Discord at KARDS.com.

This deck was constructed on the 0.8.16 build of KARDS – Card text/cost/rarity may have changed since publication.

This deck is heavily influenced by your opening hand.

The combo that you are hoping to see is an open frontline, a 554th Rifle Regiment and an Iron From the North. When you get your opening hand you should aggressively mulligan anything over 2 deploy cost while also looking for those pieces.

On your first turn, if you can, get the Soviet infantry up in the front, fire off the Iron From the North order, and then dump your hand.

4. Pioneer Regiments with their front line buffs, Panzer 35ts with their 0 operation costs if you have infantry, or Sd KFz 222s with their adjacent unit power boots, are all great candidates to hit the field early.

Refuel with an Enigma and you will be surprised how quickly you flood the front line and drop an opponent.

I have been lucky enough to win games on turns 4 or 5.

Just keep in mind that this deck relies heavily on the “Blitz” mechanic. Of the 24 units in the deck, 17 of them have blitz to move and attack the turn they come into play.

The top priority is to get control of the front line.

The 554th Rifle Regiment is ideally suited for this, but don’t be afraid to use an Sd KFz 222 on Turn 2 to get that job done. If you have to use a Pioneer Regiment to get control of the front, you can do that, but the HP buff that the Pioneers give is critical to holding on to the front which is just as important as getting there in the first place. 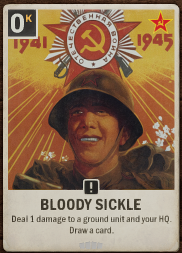 If you play second there are going to be plenty of times that a blitzing Japanese infantry unit gets in the way. This is great if you have a Bloody Sickle. An early 2-for-1 with the Sickle is actually a nice boost.

Some turn 1 examples (adding in a Bloody Sickle 2-for-1 if a blitzing Japanese infantry unit is involved at all):

Ignore almost everything that your opponent is doing and go after their HQ. Most of the time, you should be crashing in for 4-7 damage per turn on turns 3 and 4. 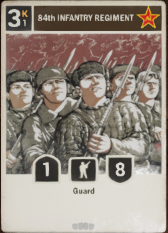 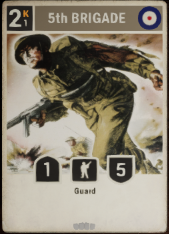 When you need to, use your Bloody Sickles, Sudden Strikes, and Tactical Strikes to clear the way of guard units – 5th Brigade, a 22nd Guards Brigade, 84th Infantry Regiment, and/or Churchill tanks. The recent change in the deploy cost of the Churchill tank is a nice boost for this deck.

If you have infantry on the battlefield, drop a Panzer 35t (or two!), move up and attack away.

Finally, always, always, always make sure to use your Enigmas for maximum draw. If you have to drop an Iron From the North just to get it out of your hand, that is OK, because it is worth drawing an extra card.

Frankly, if you play an Enigma on turns 4 or 5, you are probably going to win the game. Most of the time these turn into a Draw 3-5 depending on the opponent. The Enigma will give you the boost you need to slam the door after dumping your opening hand.

I was lucky enough to open an Enigma in a pack and then I burned through 80 resources to get a second copy. It is that important.

It is time to drop the hammer at this point.

If you draw your single Blitzkrieg then you probably won’t have to bother with the heavier tanks. With 3 units in the frontline, a Blitzkrieg is usually 15-18 damage.

The only good non-HQ things to attack are bombers and guard units. Other than those, just go for the throat.

This part of the game is also where you have to be able to think on your feet. Sometimes you won’t get the ideal draws that we have been talking about and have to adapt.

If you do fall behind, one tactic can be to sandbag a few Pioneers in your hand, smash through early opposing units with the smaller Panzers, race to the front and then drop an Iron From the North and a few Pioneers to hold control until the big tanks can roll up.

Hopefully, the opponent has burned through their hand trying to get ahead at the start so they won’t have too much to fight back with.

The moral of the story is, it isn’t impossible to come back against a quick Japanese/American deck, but you have to time your attack, get the front, and flood the field when you have your chance. If you miss that chance you are unlikely to get another one and then you are going to be outclassed in the late game.

If you haven’t won the game at this point, things are going to get rougher and rougher.

You might make it to turn 10, but you better be rolling in with Panzer III-Js and T-34s.

Late game artillery, bombers, and big tanks will grind this deck out. We are all about speed, speed, speed.

The longer the game goes the worse your chances are of finishing it. 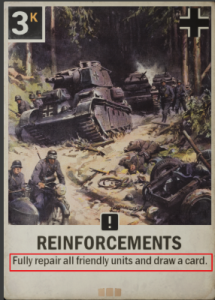 The deck rotates around the Enigmas. Taking them out is a big downgrade.

Reinforcements isn’t a bad alternative, the thing is, it just isn’t as good.

Healing up damaged units plus getting a card is good. You could even make the argument that healing units are worth a card or so, but it isn’t as backbreaking as just drawing five or six fresh cards when the opponent thinks they have things stabilized.

If you have limited time and resources, I played a bunch with this deck with only 1 Enigma and did pretty well still.

Iron From the North — Aggressive/Draw Unit

“Hey, wait a minute,” I hear you saying, “You pointed out all of those cool things that Iron From the North can do. Why would you cut one?”

Yes, however, Cybernetic makes a good point in his analysis that drawing an Iron From the North off the top of the deck late in the game is usually pretty bad.

I have had pretty good luck so far only seeing one or two a game and avoiding drawing them for the most part, but this is certainly an area of further exploration.

There are tons of options to the shrewd commander, but here are some specific spots that I am hoping to test. 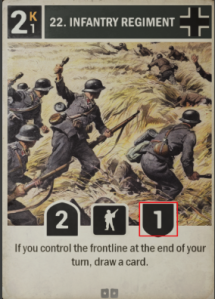 I think this is a natural progression. This deck is so frontline driven that having a card-draw engine constantly drawing an extra card per turn cycle is very enticing.

If you have this one then you might only have to play 1 Enigma.

Since the 22. Infantry Regiment is special then there isn’t much gained on the resources front, but it would be worth a try.

Just watch out for Eagle’s Claws. 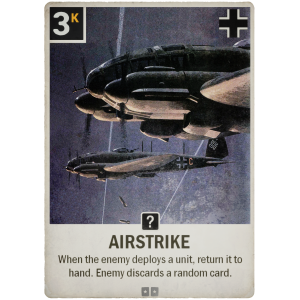 I know what Sudden Strike can do, but I am interested in what a new card could bring to the table.

There was a time when I was playing a full three copies of the old version of Sky Barons in this deck (return a unit to its owner’s hand, if it is a bomber destroy it). The loss of an early turn’s worth of kredits was, essentially, a killing blow because this deck kills the opposing HQ so quickly.

The new Airstrike looks like it might fill that role. Plus, it has an added ambush benefit since it is a countermeasure.

If a Churchill is on its way down it will be pretty satisfying to send it back and nab another card from the opponent’s hand too. 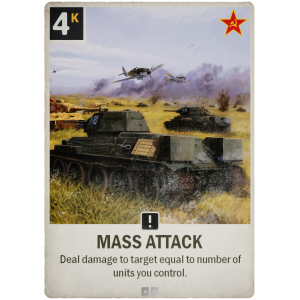 Finally, this is another experiment.

The T-34 is most effective on Turns 6 or 7 so it can move and attack right away.

Mass Attack will lower the curve and, I figure, be a 3-4 damage order to any single target.

That might end a game or blow up a troublesome guard unit that has stumbled in the way.

It might be right to even use two of these, time will tell.

As with all of the content here at KARDSPodcast, we are open to feedback and questions.

Feel free to send anything to kardspodcast@gmail.com, reach out on Twitter @KARDSPodcast, or hit me up on the Discord channel.